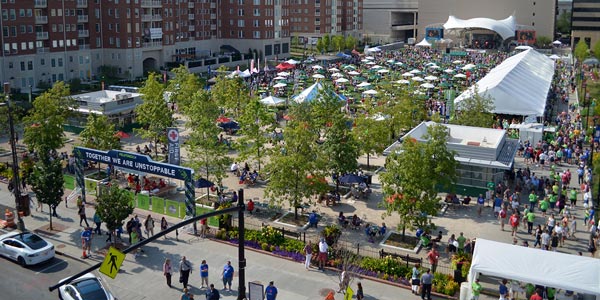 When organizers were planning an event as important and expansive as Pelotonia, they needed a mobile sanitation company with a history of reliability and cleanliness. Porta Kleen was their clear choice.

Founded in Columbus, Ohio, in 2008, Pelotonia is a grassroots bike tour with a goal of ending cancer. The most recent tour took place August 8 to August 10.

It was the fourth year Porta Kleen serviced the event. Because Pelotonia is a charitable event, Porta Kleen management decided to discount its services by 50 percent, becoming one of Pelotonia’s nine official Service Contributors.

Porta Kleen General Manager Adam Black said the keys to seamlessly delivering and servicing this amount of equipment were the company’s focus on logistics and planning and its experience handling large special events.

“There are not many companies that have the equipment and manpower to proficiently provide the tight delivery and pickup timelines with this volume of equipment,” said Black.

Pelotonia is a three-day experience that includes a weekend of cycling, entertainment and volunteerism. Pelotonia raises millions of dollars each year for cancer research.

Pelotonia’s operating expenses are covered by funding partners like Porta Kleen, so that 100 percent of every rider-raised dollar goes directly to fund research at The Ohio State University Comprehensive Cancer Center.