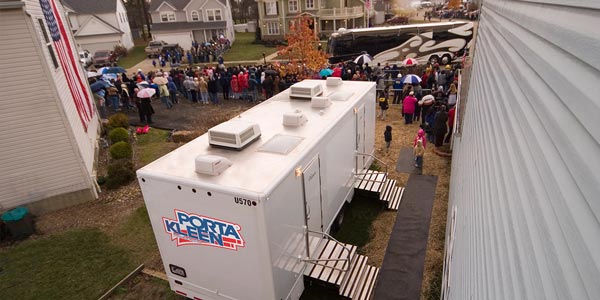 Lancaster, OH – Porta Kleen, a portable sanitation company based in Lancaster, Ohio, has donated the rental and service of portable restroom equipment to the local production of ABC’s Extreme Makeover: Home Edition. The package donated by Porta Kleen includes two mobile restroom trailers, eight portable restroom units and service for the production’s mobile homes. The show is shooting an episode in Whitehall, Ohio. Filming begins November 12, 2006 and will continue through the week. A team of contractors, designers, and several hundred workers will work around the clock to rebuild the entire house in one week. “M/I is a good customer-and when they asked if we’d like to participate, we jumped at the chance,” said Porta Kleen’s General Manager Larry Ailes. “We are all fans of the show and it made us even more excited when it was revealed who the recipient was. We are known for the quality of our equipment and service and are honored to participate.” Porta Kleen, based in Lancaster, Ohio, specializes in mobile restroom and shower units and event services. Founded in 1995, the company’s current inventory includes 22 mobile shower trailers, 50 restroom trailers, and 5,000 single restroom units. Porta Kleen serves local, regional and national clients in the government and military sectors, special events, concerts and outdoor events industries, and construction industry. More information can be found at www.portakleen.com. About ABC-TVs Extreme Makeover: Home Edition “Extreme Makeover: Home Edition,” which has won back-to-back Emmy Awards as Best Reality Program (non-competitive), will enter its 4th season on ABC. The program is produced by Endemol USA, a division of Endemol Holding. Denise Cramsey is the executive producer; and David Goldberg is the president of Endemol USA.